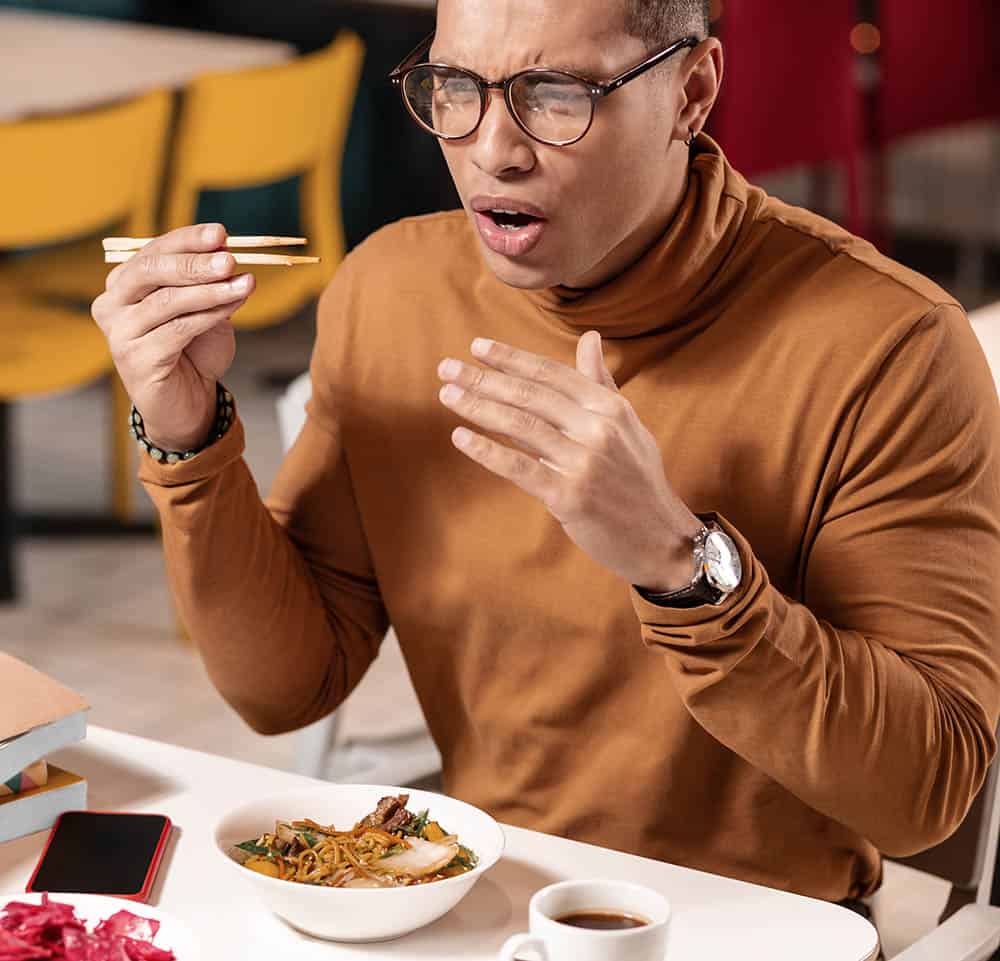 Spice tolerance differs vastly from person to person. While you may enjoy devouring an entire plate of hot wings in one sitting, your eating companion may not even be able to put pepper on their food without turning red. This begs an interesting question: Are we born able to enjoy spicy foods or is this something we train ourselves to do through repeated exposure?

The answer to both questions is “yes.” Researchers conclude that spice tolerance is a mixed matter of nature vs. nurture — meaning that, while genetics play a part, spicy food tolerance is also conditioned through habit. This article will explain the genetics behind spice tolerance as well as the environmental element that allows a person to adapt to hot foods.

What Causes Us to Feel Pain When We Eat Spice?

When you’re eating salsa, hot wings, red pepper flakes, or any other spicy food, you can experience a tingly burning sensation that brings tears to your eyes, sweat to your forehead, and makes your nose run. But have you ever questioned what makes spicy foods so painful to eat? The active component of spicy foods responsible for the painful sensation is known as capsaicin. This substance irritates all mammalian tissue when it comes into direct contact with it.

When you consume spicy foods, the burning feeling is caused by a chemical interaction that occurs between capsaicin and sensory neurons. Capsaicin binds to the heat receptor on neuron membranes and creates the feeling of excessive heat similar to what we feel when we touch something hot. These receptors are called transient receptor potential cation channel subfamily V member 1, or TRPV 1 for short. The TRPV1 receptor is encoded by the TRPV1 gene in humans and can be activated by high temperatures, acidic conditions, and other strong-tasting compounds such as mustard and wasabi.

Scientists have theorized that some people are born with pain receptors that are naturally less sensitive to capsaicin, but no research currently exists to support this theory. A more likely reality falls under the theory that those with fewer TRPV1 receptors are less sensitive to the burning sensation than people with many more receptors, because they don’t take up as much surface area and overwhelm the senses.

In 2012, a study was conducted on identical twins (who shared the same genetic makeup) and fraternal twins (who were genetically distinct) to discover the extent to which genes play a part in spice tolerance. Researchers hoped to find that the genetically identical twins would have the same sensory reaction to spicy food. Sensory tests were carried out on group participants who liked and disliked spicy food; the non-likers rated the sensation as intense and unpleasant, while likers had the opposite reaction.

The study found that there was a common genetic factor that regulated responses to spicy foods. The results revealed that genetic factors accounted for 18% to 58% of the variation in the enjoyment of spicy food, which allowed the researchers to conclude that spice tolerance does have ties to genetics.

For those born with a low tolerance to spice, here is some good news. Just because you’re born with fewer capsaicin receptors doesn’t mean you will never be able to enjoy spicy food in your lifetime. It isn’t a myth — you really can increase your level of spice tolerance through frequent exposure.

When you eat foods containing capsaicin, your TRPV1 receptors open up and let sodium and calcium ions in, which sends pain signals to the brain. But with repeated exposure, the calcium ions close off the receptor and prevent further pain signal transmission.

This means that by continually exposing your pain receptors to capsaicin, you physically change your nerve endings and eventually desensitize them, which allows you to eat more spicy food without such a strong pain sensation. Over time, your entire nerve ending can degrade, which is a phenomenon that science still doesn’t fully understand yet. However, these nerves can grow back, so if you want to maintain your tolerance to spicy food, you have to eat it often.

If you want to become more tolerant of spicy food, simply introduce small amounts of it into your diet over time. For example, you could add red pepper flakes to your pizza. Put a few extra dashes of chili powder in your soup. Add a few drops of Tabasco to your ketchup. Before you know it, you’ll be enjoying the flavor of spicy food like you never imagined.

Find Out Your Genetic Likelihood of Spice Tolerance

Is spice tolerance genetic? Genetics and everyday habits combine to determine an individual’s spicy food pain tolerance. Next time you’re at a Mexican restaurant and you can’t handle the heat of the salsa, don’t point your finger at your parents. To avoid a face-melting sweatfest, consistently eat a little spice over time and you’ll train your body to handle the heat!

Be the first to hear about all things Kean Health, get exclusive access and get 35% off your first order!

Want to find out about Gut Health