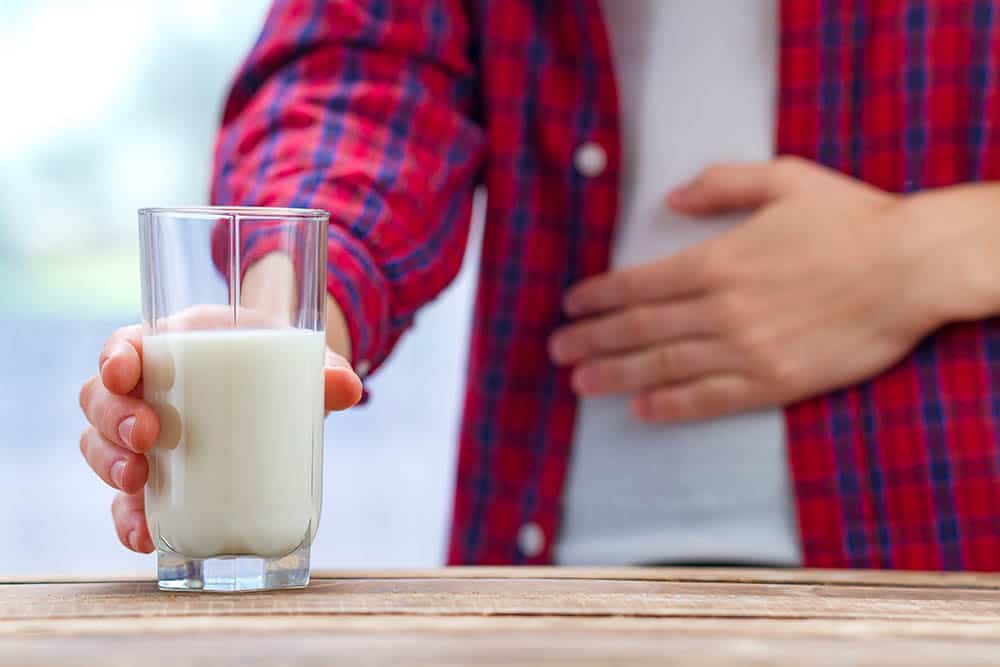 What Is Lactose Intolerance and How is it Identified?

Lactose intolerance is the inability to digest lactose, the sugar that naturally exists in milk and other dairy products. The condition causes discomfort but not damage, and is accompanied by stomach pain, gas, diarrhea, nausea, and flatulence, which can make it quite uncomfortable to live with. Roughly 75% percent of adults around the world suffer from lactose intolerance in some form. So why is it so widespread? How is it linked to your genes and gut health and how can you identify it in yourself?

What Causes Lactose Intolerance and What Are the Symptoms?

As children grow up, approximately two-thirds of them stop digesting milk as they begin implementing new foods in their diet, which causes their bodies to decrease lactase production (the enzyme produced by the small intestine lining that digests lactose). When this happens, the body stops digesting lactose in the stomach, and lactose is broken down by bacteria in the colon instead, which causes gas as a result.

Some adults who suffer from lactose intolerance and the inability to produce lactase feel bloated and have nausea, abdominal pain, flatulence, and/or diarrhea approximately half an hour to two hours after eating dairy products. Others with lactase non-persistence (a lactase deficit) produce small amounts of the enzyme and can still have dairy in small amounts without experiencing symptoms. For these people, it may be difficult to digest milk but easier to digest yogurt or cheese due to the fermentation processes that break down the lactose in these products.

Primary lactose intolerance is the most prevalent among adults. It develops when the body makes less lactase than it requires in order to support lactose breakdown. Primary lactose intolerance is a genetically inherited condition that involves the passing down of a genetic mutation from parent to child. The condition is most commonly passed down among Hispanics, Africans, Asians, and those of southern European and Mediterranean descent, as these groups of people historically consumed lower amounts of dairy.

Some prematurely born infants may have a temporary form of developmental lactose intolerance that prevents them from being able to digest the lactose in breast milk or formula. This condition is rare and often resolves itself on its own some time after birth. Congenital lactose intolerance, on the other hand, is genetic and will stick around if both parents have passed on the gene for lactose intolerance to their child, preventing the small intestine from producing sufficient lactase. Infants with this condition have severe diarrhea in response to breast milk and formula and will need a lactose-free formula to prevent dehydration and dangerous weight loss.

The Link Between Lactose Intolerance and Genetics

As mentioned, some forms of lactose intolerance are believed to be genetically inherited conditions. For example, congenital lactose intolerance may be passed down in an autosomal recessive pattern. This means that both parents carry a mutated LCT gene (the gene that contains instruction for making lactase), usually without displaying symptoms, and pass it on to their offspring.

The MCM6 gene, or the regulatory element that controls the expression of the LCT gene, is directly connected to a person’s lactose-digestion abilities in adulthood. This gene is also inherited from parents. One copy of an altered MCM6 gene is enough to support proper lactase production. However, people who did not inherit a variation of the regulatory element from either of their parents will most likely have lactose intolerance to some extent.

The Relationship Between Lactose and Gut Health

The relationship between lactose and gut health is a complex one that science still doesn’t fully understand, but one thing that research knows for sure is that what we eat impacts our microbiome heavily — and it starts at an early age. In fact, your infancy sets the stage for your lifelong gut health. Your first exposure to breast milk is where it all begins.

A 2017 research study of 107 mothers and their babies, conducted by the University of California, Los Angeles, found that newborns received 28% of their gut bacteria from breastmilk in their first month, which contributed to greater gut diversity later in life. Microbial diversity is a distinct characteristic of healthy individuals, which suggests that dairy consumption early in life has a positive effect on gut health.

Later in life, dairy products with probiotics can be good for your gut and other aspects of your health. For example, the consumption of soft cheese, yogurt, and milk in adulthood have been associated with increased vitamin K production in the gut, which plays a part in healthy blood clotting functions and other aspects of human health. The protein casein, which is found in these dairy products, also contributes to long cell life and is packed with branched-chain amino acids (BCAAs). The more BCAAs you have in your gut, the higher the Bifidobacteria you’ll have and the younger your gut will appear. Bifidobacteria live in your intestines and stomach and aid in digestion and the reduction of bad bacteria.

However, dairy consumption has also been connected to trimethylamine N-oxide production in the gut, which is correlated with heart health problems later in life. Further research is still needed to determine whether lactose intolerance helps or hurts the gut overall. For now, we know that dairy helps in some ways and hurts in others. It could be safe to conclude that the best way to make sure your lactose consumption is helping your gut is to do so in moderation and avoid completely cutting dairy from your diet, even if you are lactose intolerant.

How to Manage Lactose Intolerance for a Healthier Gut

At this point, you might be scratching your head, wondering why a lactose-intolerant individual should consume dairy products. Research has shown that milk products have many beneficial impacts on the microbiome and that avoiding lactose can lead to calcium deficiencies and other health problems. Your safest bet is to eat small amounts of dairy at a time in combination with non-dairy foods, paying attention to which lactose-containing foods your body tolerates best.

Some studies even suggest that some people can alleviate the symptoms of lactose intolerance by targeting their microbe population and encouraging lactose-digesting bacteria. This can be done with probiotics, digestive aids, small amounts of fermented dairy products, and other fermented and cultured food products. These will help your gut bacteria flourish and diversify your bacterial population. No one solution will work for every person, so here are some further recommendations for including dairy in your diet to improve your microbiome composition:

Not sure where you stand with lactose tolerance or gut health? Kean Health is here to help you discover your likelihood of having lactose intolerance and identify the health of your microbiome. Order our Gut, Gut+, or Gene test today to shed light on your health!

Want to find out about Gut Health